Updated 2022-02-24 with new comparison station Siljansfors (climate data from The reference climate station in the Siljansfors Experimental Forest, run by the Unit for Field-based Forest Research at The Swedish University of Agricultural Sciences, Dalarna County)

The temperature record from Uppsala in Sweden starts already in 1722. This is one of the world's longest temperature series available. A great job has been made to adjust and homogenize this data to be consistent over time, measurement locations and changed equipment. However, during the 20th and 21th century this temperature series has diverged substantially from surrounding rural stations. This is probably due to urbanisations effects from the growing city of Uppsala, which has more than doubled its inhabitants from the 1950th to now. The location of the measurements has also been moved, not further away from the city, but instead into the city. This gives the incorrect impression that the temperature lately has increased much more than it actually has.

There is however a well maintained reference measurement station, located some 5km north of the city center, at the Uppsala airport (N 59.895 E 17.594, 13 m above sea level). This is a former military airbase which has records of temperature 8 times per day from mid 1952 and every hour from 1962. The Uppsala Airport station was moved during 1995 from a place near the air traffic control tower to the beginning of the runway. But there is no apparent jump in the temperature records at that time when comparing with surrounding stations.

The long temperature series of Uppsala is maintained by Uppsala university and more information is available on their homepage here. The Uppsala series is described in an article:

The homogenisation method is described in:

The Uppsala series can be downloaded from Swedish Meteorological and Hydrological Institute (SMHI) here.

The adjusted Uppsala series, which has been adjusted by use of the Uppsala airport data, can be downloaded in several formats:

- Monthly and yearly data in csv format that can be opened with spreadsheet programs (with decimal comma or decimal dot) (updated 2023-01-13):

The yearly average of the adjusted Uppsala series is plotted below (updated 2023-01-13): 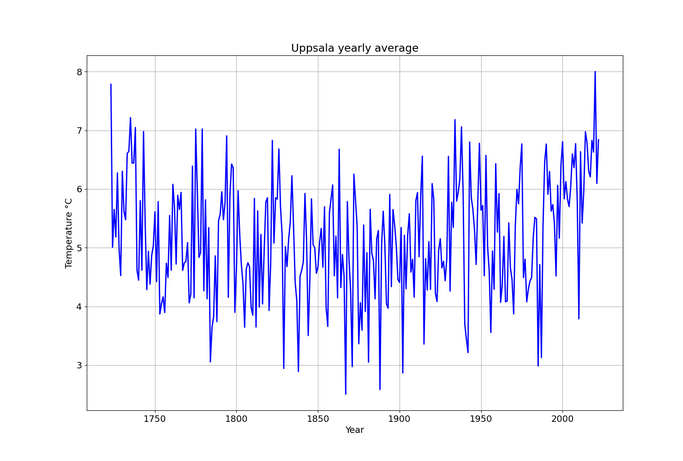 The difference between the original Uppsala series from Uppsala university and this adjusted series is plotted below per month (10 year moving average smoothing): 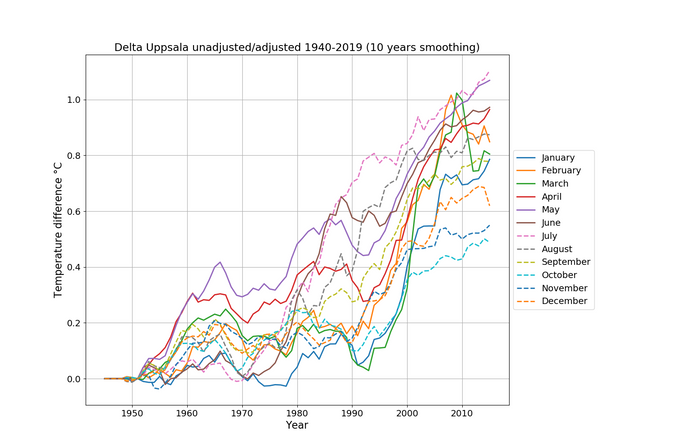 The Uppsala series has been adjusted with a simple algorithm described below. It should be easy to reproduce this calculation for someone else.

2. Use monthly means for the years 1953 to 1955 to adjust (homogenize) the daily means from Uppsala airport so that these have the same monthly means as the Uppsala series for these years.

4. For those days that miss values from Uppsala airport, use instead the Uppsala values but homogenized so that the monthly mean is the same as for Uppsala airport for this particular month.

Validation of the adjusted Uppsala series

For validation of the adjusted Uppsala series, I have used 8 different rural stations (7 nearby and 1 further away) except for Uppsala airport itself. The 8 stations has the following coordinates, altitude over sea level and distance to Uppsala ("A" means automatic station):

All data is downloaded from SMHI's site for open data except for Siljansfors from 1990 and onwards. That part comes from "The reference climate station in the Siljansfors Experimental Forest, run by the Unit for Field-based Forest Research at The Swedish University of Agricultural Sciences, Dalarna County".

The plots below show the yearly difference between the Uppsala unadjusted/adjusted data and the reference rural station. Unadjusted in this respect means that it is unadjusted by me. The adjustments made by Uppsala university are still included. 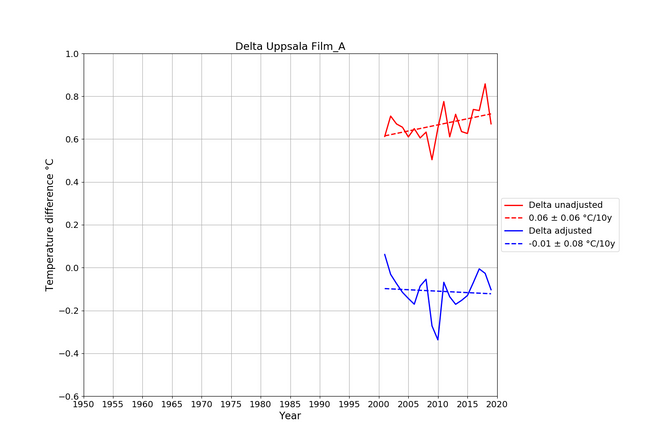 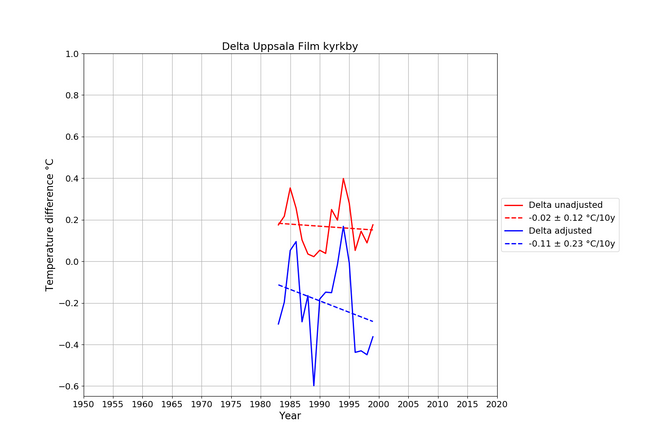 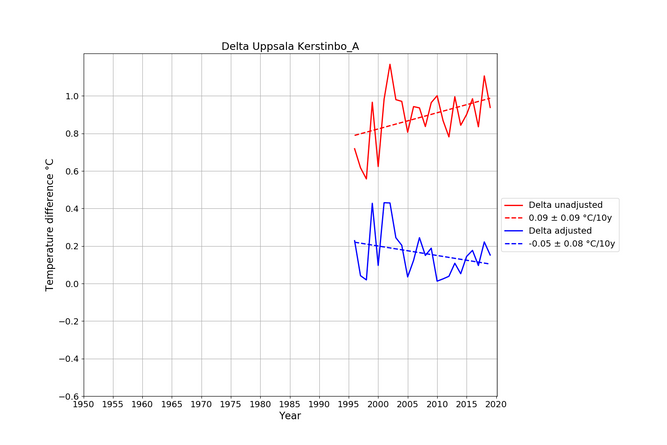 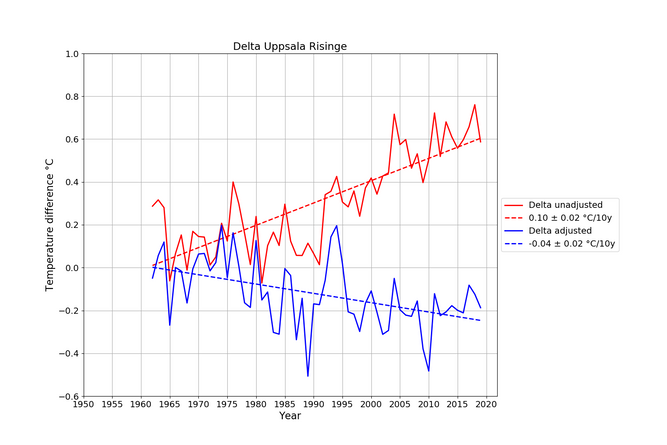 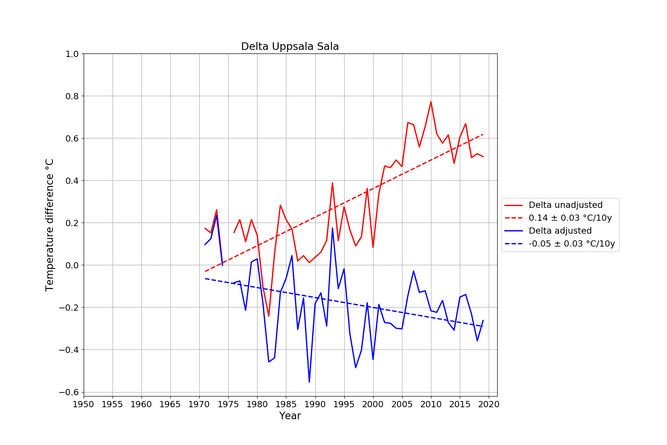 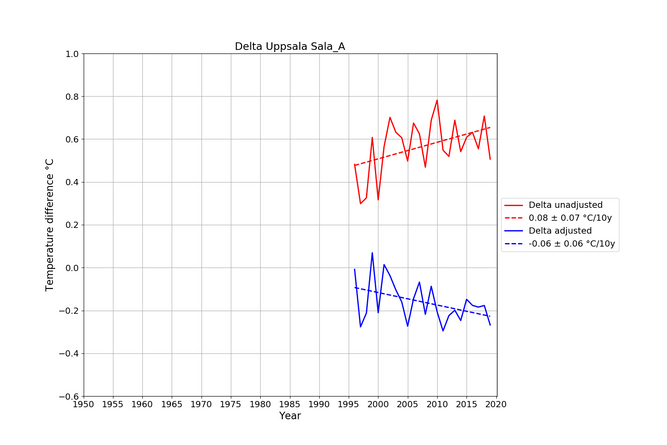 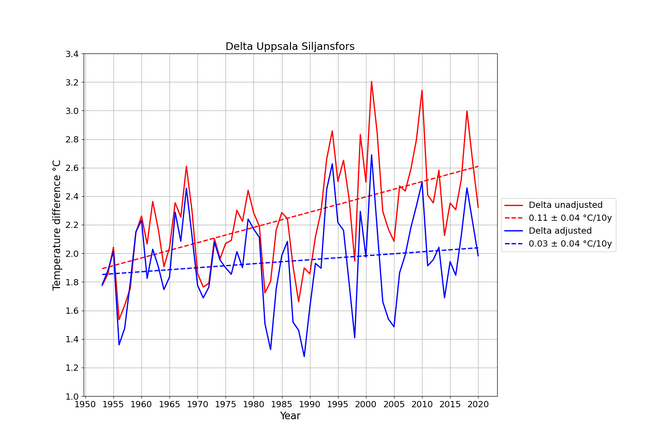 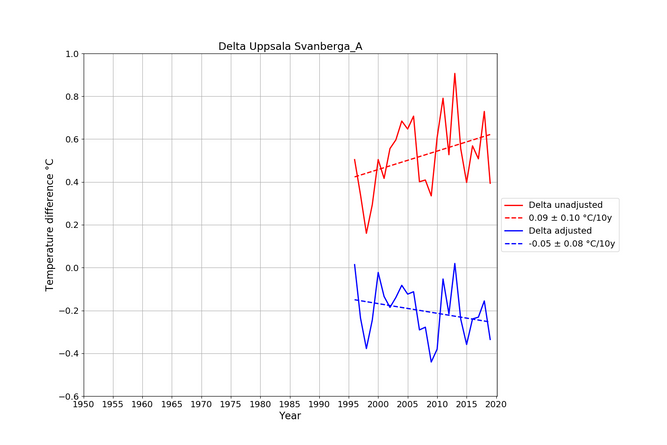 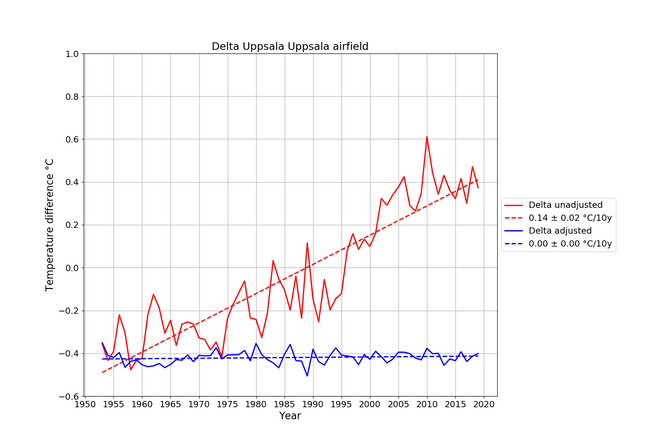 Please note that the stations above have a daily mean calculated using the Ekholm-Modén formula (based on daily max/min) except for Siljansfors from 1990 and onwards. That is the reason why the Uppsala airport doesn't have a straight line for the adjusted data.

Siljansfors is located in the woods with very little human constructions. The station was moved 1990 to a place 500m further into the woods when SMHI stopped the operation at that site and Sveriges Lantbruksuniversitet took over.